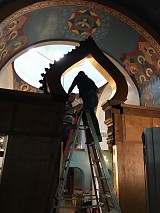 Over the last month, that parishioners of Saints Peter and Paul Church in Santa Rosa, CA, have been working on the installation of a new, carved iconostasis. Preparation of the new iconostasis, designed by Robert Latsko, a contracted architect of CJK Sacred Space in Novato, CA, was completed by the artisans of the George Loykakis studio in Crete. The initial design idea was taken from the Church of Christ the Savior “On-the-Blood” located in St Petersburg and then, under the direction of the rector, Archpriest Alexander Krassovsky, was adapted to the church building in Santa Rosa.

The first liturgy celebrated in the “new” altar was presided over by the Chief of the Russian Ecclesiastic Mission in Jerusalem, Archimandrite Roman (Krassovsky) who, together with Fr Alexander, carried out the main cross of the new iconostasis into the middle of the church, where it was blessed and given to the people present to reverence, prior to having it installed on the highest point of the iconostasis.

In his homily after the blessing of the cross, Fr Alexander explained that the words from the liturgy of the Presanctified Gifts, now emblazoned across the new iconostasis, encapsulate and exemplify the very reason for the existence of the Earthly Church - that it is here, in this holy place, where Heaven and Earth are united during the Divine Liturgy. God is here, now and in this altar, present together with the Heavenly Host. Having thanked all those who had participated in this important effort, Fr Alexander called upon all of the parishioners to continue their efforts in the completion of the internal beautification of the church in preparation for its full consecration, scheduled by the Synod of Bishops for Saturday, July 11, 2020.