Bishop Theodosius of Seattle Joined the Celebration of His Holiness Patriarch Kirill's Birthday in Moscow, Russia - 11/25/2019

On November 20, 2019, His Holiness Patriarch Kirill of Moscow and All Russia celebrated Divine Liturgy at Christ the Savior Cathedral in Moscow. This day also marked His Holiness' 73rd birthday.

This year is also the 50th anniversary of the monastic tonsure of Patriarch Kirill. On April 3, 1969, Metropolitan Nikodim (Rotov) tonsured Vladimir Gundyaev, then a seminary student, and was given the name Kirill. On April 7, he was ordained a hierodeacon, and on June 1, a hieromonk.

Among the many hierarchs and clergymen also serving on this day were His Eminence Archbishop Mark of Berlin and Germany and Vicar Bishop Theodosius of Seattle of the Russian Orthodox Church Outside of Russia.

On November 17, 2019, the parish choir of the Church of All Russian Saints in Burlingame presented a concert of Sacred works by contemporary composers.  The concert was dedicated to the memory of...

On November 5th, 2019, the eve of the Patronal Feast of Holy Virgin Cathedral in San Francisco (Western American Diocese), the Rite of Nomination was performed for Archimandrite James, Bishop-elect of Sonora.

Bishop James' Nomination Speech is below.

On November 6, 2019, Bishops, clergy and faithful of various Orthodox jurisdictions gathered in San Francisco, California, to celebrate the Patronal Feast of the Diocesan Cathedral of the Western American Diocese in honor of the Icon of the Most Holy Theotokos “Joy of All Who Sorrow.”

The solemnity of the Feast was especially auspicious as on this day a new auxiliary bishop of Western American Diocese was consecrated – His Grace Bishop James (Corazza) of Sonora.

The Elevation of the Honorable Cross Marks the Completion of a Capital Remodel, St Seraphim of Sarov Church, Boise, Idaho - 11/11/2019

In June of this year the parish of St Seraphim began a building project to raise the roof of its church.  This project was expected to take 8-10 weeks. However, after removing the old roof, we found that the walls needed to be replaced as well. This situation resulted in the reconstruction of nearly the entire building.  Finally 5 months later, as we near the completion of our construction, we were able to bless the cross and raise it to the top of the new roof...

What is Holy Rus’? Is it some historical/geographical concept that belongs to past eras or an ideal we are expected to strive for? Does Holy Rus’ exist today? We asked some Russian priests these questions, and what meaning the concept of Holy Rus’ has for them personally. On Monday November 4th, 2019, the Rector and community of the Church of the Mother of God of Kazan in San Francisco celebrated their Patronal Feast. It was marked by many preparations as the parish was also observing the 70th Anniversary from its foundation.

Presiding at the Divine Liturgy was Archimandrite James Bishop-elect of Sonora. Concelebrating with him were... Over the last month, that parishioners of Saints Peter and Paul Church in Santa Rosa, CA, have been working on the installation of a new, carved iconostasis. Preparation of the new iconostasis, designed by Robert Latsko, a contracted architect of CJK Sacred Space in Novato, CA, was completed by the artisans of the George Loykakis studio in Crete. The initial design idea was taken from the Church of Christ the Savior “On-the-Blood” located in St Petersburg and then, under the direction of the rector, Archpriest Alexander Krassovsky, was adapted to the church building in Santa Rosa.

The first liturgy celebrated in the “new” altar was presided over by the Chief of the Russian Ecclesiastic Mission in Jerusalem, Archimandrite Roman (Krassovsky) who, together with Fr Alexander, carried out the main cross of the new iconostasis into the middle of the church, where it was blessed and given to the people present to reverence, prior to having it installed on the highest point of the iconostasis.

The unilateral actions of the Patriarchate of Constantinople in Ukraine, which concluded with the signing of the so-called ‘tomos of autocephaly’ in January 2019 in defiance of the will of the episcopate, clergy, monastics and laity of the Ukrainian Orthodox Church, have provoked a bitter debate among churches... The Holy Synod of the Russian Orthodox Church confirms the candidacy of Archimandrite James (Corazza) for Bishop of Sonora, Second Vicar of the Western American Diocese - 08/30/2019

The Holy Synod of the Russian Orthodox Church, during a meeting on August 30, 2019, at Danilov Monastery in Moscow, deliberated on the confirmation of a decision of the Synod of Bishops of the Russian Orthodox Church Outside of Russia on the candidacy of Archimandrite James (Corazza) for Bishop of Sonora, Second Vicar of the Western American Diocese.

On August 28, 2019, the Feast of the Dormition of the Most Holy Theotokos, His Eminence KYRILL Archbishop of San Francisco and Western America received in His Cathedral dedicated to the Icon of the Mother of God “Joy of All Who Sorrow” five bishops of the Serbian Orthodox Church, who are presently visiting the Diocese of Western America in conjunction with the celebration of the 800th Anniversary of the Autocephaly of the Serbian Orthodox Church.

On June 27-29, 2019, the Archbishop Anthony (Medvedev) Memorial Library at the headquarters of the Western American Diocese hosted a regular session of the Synod of Bishops of the Russian Orthodox Church Outside of Russia, which coincided with the 25th-anniversary celebrations of the canonization of St John of Shanghai and San Francisco the Miracle-worker. The building was once an orphanage dedicated to St Tikhon of Zadonsk, which houses a chapel to the saint, as well as the humble residence of St John (Maximovich), the great archpastor of the Russian diaspora. Here, St John would bring the Bloodless Sacrifice “on behalf of all and for all.”

A regular meeting of the Synod of Bishops of the Russian Orthodox Church Outside of Russia, which has coincided with the day of celebration of the memory of Holy Hierarch John of Shanghai and San Francisco the Wonderworker and the 25th Anniversary of his canonization, is being convened within the borders of the Western American Diocese.

Most of the senior bishops of the Russian Orthodox Church Outside of Russia have arrived San Francisco to discuss and...

On June 27th, 2019, the faithful gathered in the Cathedral of the Mother of God “Joy of all Who Sorrow,” to prayerfully celebrate the Akathist to St. John of Shanghai and San Fransisco the Wonderworker. The congregation was lead in singing the Kontakia of the Akathist by His Grace Bishop Irenei of London and Western Europe and His Grace Bishop Nicholai of Manhattan; their voices were complemented by the other clergy present. Members of the congregation held copies of the service, following the example of the clergy in hymning the memory of St. John.

Everyone present felt the blessing of being able to stand in the cathedral built through the prayers, determination and inspiration of St. John, and to perform the akathist to his memory... 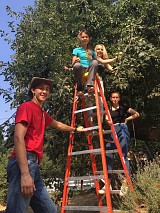 There are still some places left. Register here NOW!

Below is a link to a film that depicts last year’s workweek. As you watch please, note, this year will be a little different. The girls will not be staying at the lake as in the past, which was a ½ hour drive one way. This time the girls will stay up that hill in the large private residence  5 minutes from the monastery. The boys will be staying at the monastery in tents.

The Administrator of the Orthodox School of Bethany Nun Maria will be speaking at Holy Ascension Church on Wednesday, May 15, at 7:00 pm. Come, see, hear and support this school. Further details about the Bethany School here.

On Sunday, March 24, 2019, the Parish Choir of the Church of All Russian Saints in Burlingame, California, presented its annual “Lenten” choral recital, featuring works heard at Great Lent and Passion Week services. The concert was dedicated to the memory of long-time choirmaster Vladimir Pavlovich Roudenko, who peacefully departed this world on February 8, 2019, after a 7-decade career of conducting youth and adult choirs on three continents.

Epistle of the Clergy of the Western American Diocese, Russian Orthodox Church Outside of Russia - 04/03/2019

We, the clergy of the Western American Diocese, committed in humble service to the Gospel of Christ and obedient to the life of His Church, having gathered for three days in the presence of the myrrh-streaming “Hawaiian” Iveron icon of the Theotokos for our Lenten pastoral conference, humbly address ourselves to our faithful flock and all pious Orthodox Christians. Standing, as we have during these days, before the wonderworking icon amidst throngs of faithful from every land — from America, Russia, Ukraine, Greece, Romania, Serbia, Syria and many other places — who came to venerate the Holy Virgin and pray with us in spiritual unity,... The Sunday of Orthodoxy was Celebrated in San Francisco, California - 03/21/2019

On the First Sunday of Great Lent, March 17, 2019, His Eminence KYRILL Archbishop of San Francisco and Western America celebrated the Sunday of Orthodoxy at Holy Trinity Cathedral of the Orthodox Church in America (OCA) in San Francisco, California.

The Primate of the OCA the Most Blessed Tikhon Archbishop of Washington, Metropolitan of All America and Canada presided over the Vespers Service for the Sunday of Orthodoxy. Nativity Epistle of His Eminence Hilarion, Metropolitan of Eastern America and New York, First Hierarch of the Russian Church Abroad - 01/05/2019

I offer my words of greeting, which are inspired by Christian love, on this great feast of the Nativity of Christ! With a warm heart I wish you all that profound and inalienable peace, which was heralded by the angels above the town of Bethlehem on the holy night when "the Word was made flesh" (John 1:14).

Youth from throughout the Diocese gathered in Placerville, CA, from December 23-28, 2018.

Excursions included trips to Sutter’s Mill where the 1849 Gold Rush began and a decent into Black Chasm Cavern...