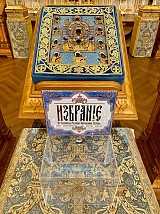 On Tuesday, 13 September 2022, the member hierarchs of the Council of Bishops of the Russian Orthodox Church Outside of Russia, presided over by His Eminence Metropolitan Mark of Berlin and Germany, celebrated Divine Liturgy at the Synodal Cathedral of Our Lady “of the Sign” in New York City. Afterward, the bishops performed a moleben for the opening of a Council of Bishops, invoking the aid of the Holy Spirit for their work.

The hierarchs then proceeded to the Synodal Cathedral for the election of a new First Hierarch of the Russian Orthodox Church Outside of Russia.

His Grace Bishop Nicholas was elected.

Having heard the results of the second round of voting, the bishops exclaimed “Axios” (“he is worthy”) to their brother archpastor, and a litany commemorating “our Master Bishop Nicholas, elected Primate of the Russian Church Abroad” was intoned, followed by the singing of Many Years.

Receiving the congratulations of his fellow archpastors, the newly-elected Primate of the Russian Orthodox Church Outside of Russia expressed his gratitude for their trust, which he hopes, with God’s help, to satisfy in the performance of his service.

Afterwards, having heard reports by ruling bishops of Germany, Western American, and Canadian Dioceses and deliberating on their current affairs, the hierarchs concluded their first day of work.