On Saturday, September 18th  the miraculous myrrh-streaming Icon of the Mother of God “Softener of Stony Hearts” arrived from Moscow, Russia, with its guardian, Sergei Fomin, for the purpose of making a brief visit to the Western American Diocese. Upon arrival, the wonderworking image was greeted in the Diocesan Cathedral dedicated to the Icon of the Mother of God “Joy of All Who Sorrow” in San Francisco. A molebin with an Akathist Hymn to the Most Holy Theotokos was chanted, which was immediately there followed the All-night Vigil presided by His Eminence KYRILL of Archbishop of San Francisco and Western America together with the Dean of the Cathedral, Archpriest Peter Perekrestov, and other of the clergy. The cathedral was overflowing with the faithful that came together from various parishes to venerate the Mother of God.

Early the next morning, September 19th, the icon continued on its way to Southern California. 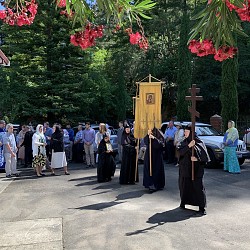